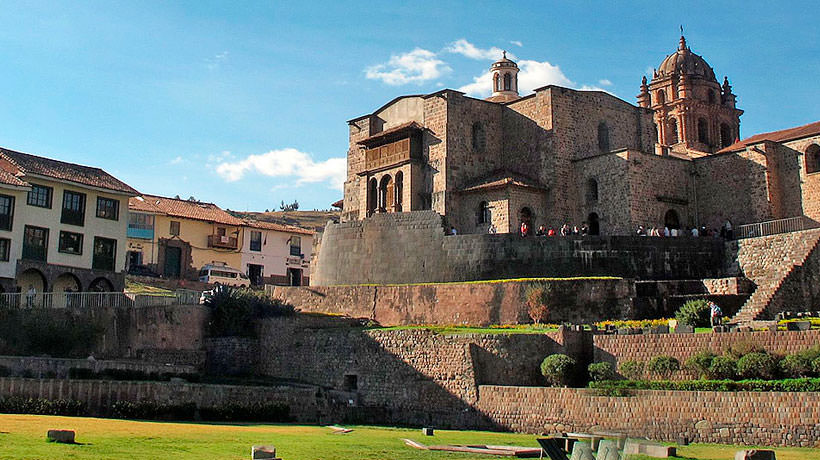 Walking around Cusco is like visiting a large open-air museum and one of this museum masterpieces is Qoricancha. This Inca temple only preserves its foundations. On top of them stands the convent of Santo Domingo.

Qoricancha, whose name means in Quechua Golden Temple, was the political and religious center of Tahuantinsuyo and the site where the Incas paid homage to Inti, the Sun God.

Qoricancha draws the attention of all tourists because it is a living example of the Hispanic imposition in Cusco and, of course, because of its impressive Inca architecture. The temple hides a lot of history behind its walls that we tell you here today.

Qoricancha during the Inca period

There are different versions of who was the ruler that ordered to build Qoricancha; while some people say that this building existed before the Incas and that they did a remodeling of the building, others say it was the Inca Pachacutec who ordered the construction of the temple after his victory over the chanchas in 1438.

Also, according to some historians, during the time of Manco Cápac this was a small temple called Inticancha, and with the arrival of Pachacútec the construction reached its colossal size and was renamed Qoricancha.

Like all the Inca buildings, this temple was built with stones carved with great precision and fitted together with no mortar. In addition to an impressive size, these stones attract attention because of the large number of angles they have: some of them have up to 30 corners that connect perfectly with all those around them.

Because it was dedicated to the sun god, this building was completely covered by sumptuous gold plates. In addition, inside the temple were represented in gold, silver, and tumbaga (an alloy of gold and copper) some of the Inca deities and certain elements of the fauna and flora of our country.

Before the arrival of the Spanish conquerors, the temple had a large number of rooms with different functions. The interior was only for the most important personalities of the time, while the inhabitants of the entire Empire who came to this place to worship their gods did it abroad. In addition, in the gardens of the lower part of the temple came the conquered tribes to deliver their offerings.

Qoricancha and the arrival of the Spanish conquerors

In the year 1533 Qoricancha suffered, like the whole country, the ambition of the Spanish conquerors, who sacked the temple and pulled from its walls the large gold plates.

Juan Pizarro, brother of Francisco Pizarro, conqueror of Peru, received this temple and donated it to the Dominicans. After taking away all the elements of value and destroying the great majority of the building, this religious order built on its foundations the Convent of Santo Domingo.